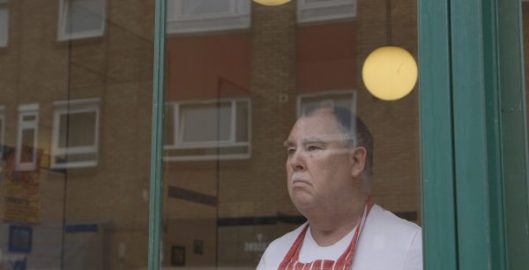 Focusing on one East London street and its inhabitants over a four-year period – a film about love and loss, a community unravelled by gentrification, and the nation’s slide into Brexit.
As the glinting steel and mirror-glass skyscrapers of London’s financial hub edge ever closer, the area surrounding Hoxton Street has been transformed by luxury developments and sky-high property prices. This traditional East London street, less than a mile from the City of London, has become the last bastion of the areas disadvantaged – a concentration of the aged, poor and dispossessed.

Set against rapid gentrification, the fallout from Grenfell and the eruption of Brexit, Zed Nelson’s feature-length debut is a comic, tragic and deeply moving portrait of not just a street, but a nation on the cusp of enormous change.

Afterwards director Zed Nelson will be in conversation with Docheads’ Katharine Round.